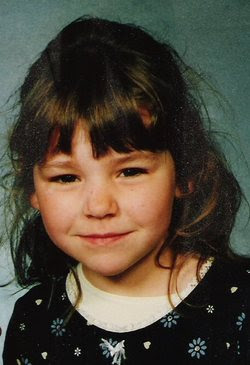 6-year-old Coral Burrows went missing at around 9am, Tuesday 9th September 2003. She was found ten days later in a bush area a few miles from her home. Her stepfather, Steven Williams, was arrested and charged with her murder - he'd beaten her to death in his car while driving her to school.


I didn't particularly follow this case at the time, though I remember the interviews with the distraught family, including Coral's father, before the shock arrest of her step-father for the murder.

I must have been thinking about it quite a lot, though, as it's started to appear in my dreams. Last night, for instance, I dreamed that I was watching TV when a documentary about the case came on. It was the usual sort of thing: some wiseacre psychologist "explaining" the whole thing in terms of upbringing and family influences. Talk about rushing in where angels fear to tread! Clearly for this guy there were no mysteries in heaven above or earth below.

Then came the thing that makes me sure it was a dream. They'd done some interviews with relatives, friends of the family, and so on, but then it came time to talk to the local cop. I don't know if he quite understood that he was being filmed, that all this was on the record, but he just started skiting away as if to some buddies in the pub.

From time to time, he said, someone would move into Featherston who thought that he could sell dope there, or commit petty crime, or do any of the other things he'd been used to doing where he came from. Such people usually 'took the hint' after a while and moved on of their own accord. Except for Steven Williams. He just stayed. It was almost as if he liked it.

I suddenly had this vision of how you "hint" to someone that it's time to move on: the drive-bys, the anonymous threats, the cold shoulder in the shops - a lovely vision of a community united against the stranger. It's not that I doubt that it's so, it's just that I still can't quite believe that any policeman would admit that that's how things are done, that the law's insufficient sometimes, that one needs to rely on a bit of vigilantism, a bit of mob mentality.

Maybe I'm wrong, though, maybe it wasn't a dream. Certainly the psychologist kept bleating on, unperturbed by the implications of what had been said. I don't want to sound like a conspiracy theorist, but I suddenly felt the chill of those grim dark fields, the distance between houses, the ease with which anything can be done, anything hidden in surroundings like those.

But you have to want to - that's the point. No matter how cruelly you've been brought up, no matter how much of a hairtrigger temper you've got, you have to be ready to go through with it - to hide the body, even take part in the search, keep on lying to everyone else in the family until it comes out.

I don't think there's any doubt that Williams did it. But then who knows? There's still something like a blip, a kind of timewarp, between heading off for school and the discovery of the body more than a week later.

What really happened during that short drive? What was said to set him off? That's if anything at all was said ... Perhaps he just cracked. But then what causes a man to break like that when others continue to stand upright, to go about their business? Drugs? No doubt that's part of it. In my dream there was something blacker there, something more like a mindstorm, a sense of horror that grew and grew and grew ...

As police cordoned off a 30 to 40 metres square area in bush near Lake Onoke (Ferry), Coral’s family learnt of the death of the six year old and the arrest of Steven Roger Williams (Coral’s step-father).

The police waited until daylight to begin their search of the area. Coral’s body was discovered at 9.15am and recovered early in the afternoon. A preliminary post mortem was started and is expected to be complete later in the weekend. Meantime the police and forensic expects will remain at the discovery site to conduct a “thorough and meticulous examination of the scene”.

29 year old Steven Roger Williams appeared in Masterton District Court charged with the murder of his stepdaughter. Coral’s family stood quietly during the hearing but others outside hurled abuse and food as Williams left. He will be held on remand until October 17.

The family came out to make a public plea for time and space to mourn their daughter’s death. In a statement issued through the police, parents Jeanna, Ron and extended family want to thank the police, volunteers and public for the support given in the search for Coral. “Our plea to all New Zealander is to treasure your children and help keep safe”