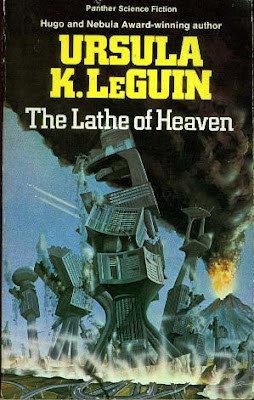 Ursula K. Le Guin, The Lathe of Heaven (1971)
A few evenings ago I was driving my rainspattered car home from a party in a thick mist, trying to make out the catseyes in the road, when I got to thinking just how strange it felt to be there, in that provisional, almost intangible space, in such undeniable danger, and yet in such a state of calm.

I was reminded of another evening, a few years ago, when I took an unexpected turn and found myself driving down a street I'd never seen before, though still (apparently) headed for the heart of the city I knew. The street was not entirely unfamiliar - that was the truly disconcerting thing. It was if I'd been along it before, but in another city, on the far side of the world. The shops were shops I'd walked past every day, but not here, not in this hemisphere. It was a very eerie feeling.

Now, in the fog, I began to call to mind a number of such incidents. There was the time in a bookshop, in my teens, when I'd examined two large red-bound hardbacks entitled, respectively, the Poems and the Cantos of a certain Ezra Pound. Ezra Pound - what an odd, old-fashioned name! The books attracted me, though I could make little of their contents. The two titles puzzled me, also: what exactly was the difference between a "poem" and a "canto"? I couldn't afford to buy them, so I had to leave them there.

It's a simple enough memory - one that's still quite tangible to me now, as I write - but one which can never have happened. There are no such volumes. I can't have seen them there. The Cantos, yes: possibly it was a large hardcover edition of the Faber edition that I saw. But the Poems? There's a slim volume called Personae, reprinted as Collected Shorter Poems - but no such pairs of books can be dredged from any bibliography. And yet it was the close match between the two that so struck me at the time.

No matter how hard I try, I can't reconcile the reality and my memory.

"Concepts cross in mist." In Ursula Le Guin's novel The Lathe of Heaven, reality is literally being dreamed into existence all around us by one nondescript individual, George Orr, who has the ability to switch from track to track on the time-space continuum, the universe's garden of forking paths. The only ones aware of what he's doing are some turtle-like aliens from Aldebaran who have, in her book, the ability to stand outside and watch the unfolding strands of this multiverse.

Orr's enemy is the arch-rationalist Dr Haber, who tries to control and channel his abilities into a single line of machine code, with predictably disastrous results.

It's just a novel, yes, but I often wonder how literally Le Guin means us to take it. The world that she describes matches so closely the one I feel I am experiencing - from a distance, through a glass darkly - at such moments of irreconcilable realities, to say nothing of those uncanny moments of déjà vu that we all share.

I feel not further, but closer to reality at such moments - as if there were a clamorous crowd of entities all around us, trying to catch our attention and wake us up to our peril, succeeding only occasionally, at times when the ordinary rules are suspended, in daydreams or deep fog. 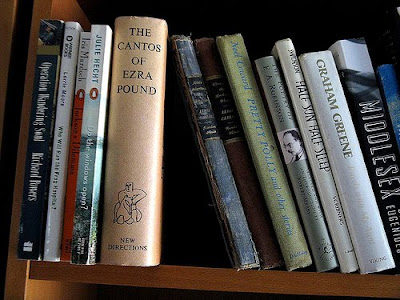