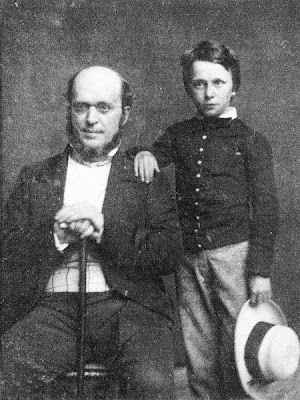 
In May 1844, while living in Windsor, in England, Henry James [Sr.] was sitting alone one evening at the family dinner table after the meal, gazing at the fire, when he had the defining spiritual experience of his life, which he would come to interpret as a Swedenborgian "vastation," a stage in the process of spiritual regeneration. This experience was an apprehension of, in his own words, "a perfectly insane and abject terror, without ostensible cause, and only to be accounted for, to my perplexed imagination, by some damned shape squatting invisible to me within the precincts of the room, and raying out from his fetid personality influences fatal to life."

James's "vastation" initiated a spiritual crisis that lasted two years, and was finally resolved through the thorough exploration of the work of Emanuel Swedenborg (1688-1772), the Swedish scientist, religious visionary and teacher, and mystic. James became convinced that, as he put it, "the curse of mankind, that which keeps our manhood so little and so depraved, is its sense of selfhood, and the absurd abominable opinionativeness it engenders." He remained attached to Swedenborg's thought for the rest of life, and never traveled without carrying Swedenborg's works with him. 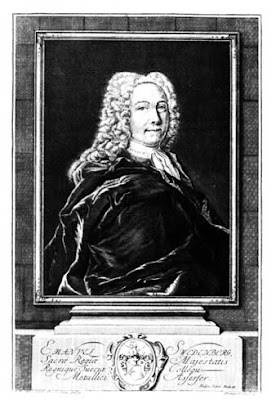 Here's some of what Swedenborg himself had to say on the subject:

There are with every man at least two evil spirits and two angels. Through the evil spirits the man has communication with hell; and through the angels, with heaven. Without communication with both no man can live a moment. Thus every man is in some society of infernals, although he is unaware of it. But their torments are not communicated to him, because he is in a state of preparation for eternal life ... Thus a man who does not live in the good of charity, and does not suffer himself to be led by the Lord, is one of the infernals, and after death also becomes a devil. [AC697]

Besides the hells there are also vastations, concerning which there is much in the Word. For in consequence of actual sins a man takes with him into the other life innumerable evils and falsities, which he accumulates and joins to himself. It is so even with those who have lived uprightly. Before these can be taken up into heaven, their evils and falsities must be dissipated, and this dissipation is called Vastation. There are many kinds of vastations, and longer and shorter periods of vastation. Some are taken up into heaven in a comparatively short time, and some immediately after death. [AC698]

There are many persons who during their life in this world from simplicity and ignorance have imbibed falsities of religious belief, and yet have had a kind of conscience in accordance with the principles of their faith, and have not like others lived in hatred, revenge, and adultery. In the other life these persons cannot be introduced into heavenly societies so long as they remain in these falsities, for they would contaminate them; and they are therefore kept for a time in the lower earth, in order that they may get rid of their false principles. The time that they remain there is longer or shorter according to the nature of the falsity, and the life contracted thereby, and according to the degree in which they have confirmed themselves in their principles. Some suffer there severely, others not severely. These sufferings are what are called Vastations, of which there is frequent mention in the Word. When the period of vastation is completed, they are taken up into heaven ... [AC1106]

– The Science of Correspondences 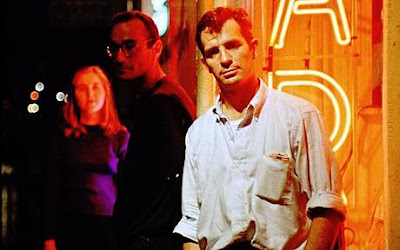 Jack Kerouac appears to have suffered some form of vastation during his time as a fire-spotter on Desolation Peak in the summer of 1956. The experience is chronicled in his novel Desolation Angels (1965), with actual extracts from the journal he kept at the time incorporated into his otherwise fictionalised text. 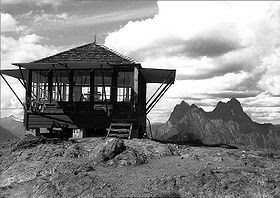