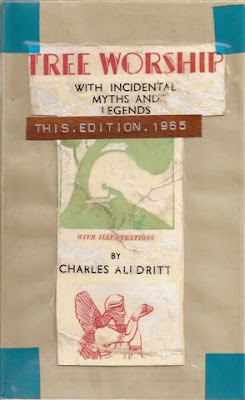 
I was reading this post a couple of weeks ago, about a book called Tree Worship, and it gave me the idea for what to call this blog.

Otherwise I wouldn't know what name to give it. Or what it's actually about.

The interesting thing about the book, from my point of view, is that its author claims that it's not really about anything either:


Early critics have suggested that the purpose of the book is not clear. Perhaps there is no purpose. An attempt has been made to avoid bias and prejudice and it is sincerely hoped that it can be similarly read.

I too am trying to avoid "bias and prejudice" in discussing the things I want to lay before you (whoever "you" may be).

The blurb is interesting, too: 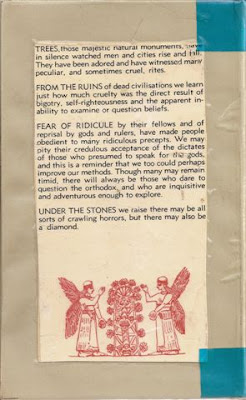 TREES, those majestic natural monuments, have in silence watched men and cities rise and fall. They have been adored and have witnessed many peculiar, and sometimes cruel, rites.

FROM THE RUINS of dead civilisations we learn just how much cruelty was the direct result of bigotry, self-righteousness and the apparent inability to examine or question beliefs.

FEAR OF RIDICULE by their fellows and of reprisal by gods and rulers, have made people obedient to many ridiculous precepts. We may pity their credulous acceptance of the dictates of those who presumed to speak for the gods, and this is a reminder that we too could perhaps improve our methods. Though many may remain timid, there will always be those who dare to question the orthodox, and who are inquisitive and adventurous enough to explore.

UNDER THE STONES we raise there may be all sorts of crawling horrors, but there may also be a diamond.

What does all that mean? I understand about the "crawling horrors", and (especially) about the "fear of ridicule" - the moment you raise such questions people start laughing at you, but what exactly is going on between the lines? Why trees, in particular? Why not the whole vegetable kingdom? Nature worship?


In conclusion it is suggested that, if the reader has any doubt regarding the possible power of trees, perhaps he has never tried the experiment of contemplation in some quiet grove or forest where trees are large and old.

Clearly he himself has had such an experience, which has suggested the collecting of materials on Tree Worship - possibly with no clearer purpose than that. Possibly, again, he decided simply to publish the materials he had without inquiring more deeply into the nature of this mystical, life-changing event - vision, epiphany, vastation, call it what you will - and has instead contented himself with some lukewarm revisionism with regards to Christianity:


It has been affirmed (Botticher) that "the worship of the tree was not only the earliest form of divine ritual, but was the last to disappear before the rise of Christianity."
...
As this goes to press it is interesting to find that last year (1964) the Church of Rome has been pleased to suggest that the "Holy Spirit” is also present "in other faiths." This is a big step away from the bigotry of ancient times but we still need to travel further.

Maybe some of his other books of poetry or "speculative fiction" (there's quite a lot of them) take the argument further. In any case, I'm very grateful to him for giving a focus to my own speculations. I can't ignore the fact that trees have a lot to do with it - an instinctive respect and awe before their complexity and majesty, a gradually growing conviction that what they have to teach us about patience and endurance is precisely what we need to hear ... what I think I did hear that day.


1965 - Tree Worship: With Incidental Myths and Legends. Auckland: Printed for the Author by Strong and Ready Ltd. [xiv + 122 pp.]

1968 - Four of a kind : Tarantella; What next? Fantastic reality; the Family future. 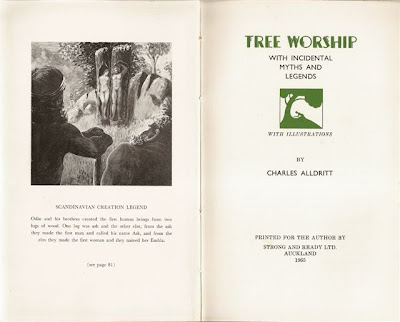 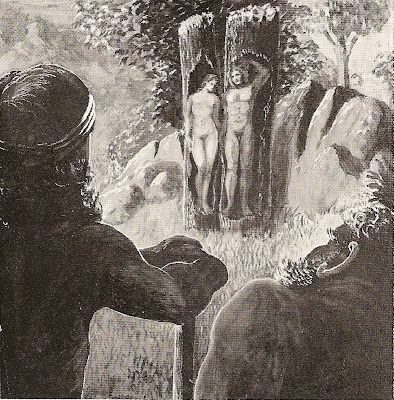 I once wrote a poem 'Like a tree' published in a book of the same name. No matter. While writing that poem, though, I discovered a neat fact. I have just googled it to make sure I had it right. Here goes:

"The haemoglobin of the red blood cell and the chlorophyll of the plant are virtually identical in molecular structure, with the only difference being the centre atom. In haemoglobin that atom is iron and in chlorophyll it’s magnesium."

All the best, Judy