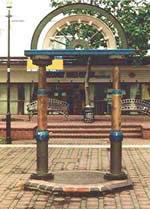 I was trying to find out some details about the mass killing of Japanese prisoners at the Featherston internment camp in 1943. I've now discovered that this is referred to as the "Featherston incident." What came up instead was a huge amount of information about the (so-called) "Featherstone massacre" of 1893 - exactly fifty years before, in the UK.

Here's some of what I found online:


In 1893 the small pit town of Featherstone was the scene of a tragic confrontation between the local mine owner, supported by troops, and a crowd of ‘locked-out’ miners. Featherstone had two working mines at the time ... Over 1000 men, and their families, depended on the pits for their livelihood.

Although the pits were successful, a downturn in the price of coal caused some mine owners across the country to take drastic action. In July 1893 they decided to stockpile their coal and to ‘lock-out’ their workers.
...
On the 7th September at Ackton Hall there were rumours about coal being loaded onto wagons at the pit and being sent to the owner’s mill in Bradford. The crowd felt this was a betrayal by the pit manager and their mood began to change. Mr Holiday, the pit manager, Mr Jaques, the foreman, and the work gang loading the wagons were confronted, with the result that the work gang fled and some wagons were overturned.
...
By late afternoon 3 officers and 26 men from the 1st Battalion South Staffordshire Regiment arrived at Featherstone and marched to the pit ... While the troops kept out of the way, Holiday and the town’s policeman, Sergeant Sparrow, tried to calm the crowd who wanted the troops to leave and were threatening to force them out if they didn’t go.

The crowd around the pit gates had swelled to several thousand as people from surrounding towns heard that something was happening in Featherstone and came to watch. During the evening the situation became more tense. Eventually the decision was taken to call in a local magistrate, Bernard Hartley JP, who, failing to get the crowd to disperse, read the Riot Act.

Reading the Riot Act was a significant action. Once read people had to disperse within one hour or suffer the consequences (potentially life imprisonment). However, it seems Hartley didn’t wait for a full hour and fearing that the situation was getting out of control ordered the troops to fire warning shots.

After an initial volley, the crowd didn’t move and jeered saying that the troops were firing blanks. This was not true, the troops had the most up-to-date Lee Enfield rifles and were using live ammunition.

The second volley caused injury to 8 people. Two men, James Gibbs (22) and James Duggan (25) were to die of their injuries. Neither man (it seems) had been involved in creating a disturbance, Gibbs had walked across the fields from nearby Loscoe to see what was going on.
...
The inquest on Duggan took place in Wakefield because he had died at Clayton Hospital in the city. The verdict returned was ‘justifiable homicide’. However, Gibbs’ inquest in Featherstone would not return a similar verdict and the jury issued a statement which pointed the finger at the lack of police in the area and Holiday’s over reaction to the situation causing the death of an innocent man.

These different verdicts into the deaths were to create ripples that spread all the way to Parliament. Questions were asked in the Commons and the Home Secretary, H.H. Asquith was forced to set up a Parliamentary Commission.
...
The report was presented to Parliament and a Commons debate followed. Keir Hardie spoke in favour of the miners and a Commons motion called for compensation to be paid to the bereaved families. Although £100 was paid to the families of Gibbs and Duggan, it was done begrudgingly by the Government. Asquith said that the compensation did not imply the Government accepted any responsibility for the deaths.

None of the injured were compensated.

The centenary of the ‘massacre’ came at a time when the town (and much of Yorkshire) was still raw from the pit strikes and confrontation with the Thatcher government during the 1980s ... The culmination of the town’s remembrance was a march. Hundreds of people, with pit banners, walked from the North Featherstone cemetery, where the two victims are buried, to the town precinct for the unveiling of a striking sculpture that was movingly dedicated by Arthur Scargill.
...
The plate at the base of the sculpture reads:-


This memorial records the centenary of an incident on September 7 1893 when, following a disturbance in Featherstone, the Riot Act was read and in the ensuing military action troops opened fire on the demonstrators, killing James Gibbs and James Arthur Duggan and wounding several others. This was just another chapter in the struggle by miners for better pay and working conditions.

The official NZ History online website has an original take on the event:


It was noted [by "those who defended the actions of the guards that day"] that the Japanese were in no position to complain about one isolated event for many Allied prisoners fared much worse in Japanese POW camps.
...
The Japanese prisoners had been generally well fed and housed and this incident was an exception to the rule.


So let's get this straight. Shooting large numbers of prisoners was "an exception to the rule" - therefore there's no reason to complain about it. Worse things happened in the Japanese camps, so they'd be best just to think of it as payback. How hypocritical for them to complain about unarmed prisoners being shot down in cold blood! They were asking for it, in any case - refusing to work, we're told.

The "unofficial version", as I heard it from my father, was that there was one particular guard who had a grudge against the prisoners (I believe he had a brother who'd been killed by the Japanese - how, I'm not sure). He was also known to be a bit of a sadist, and contrived to set up the whole thing: first encouraging them to strike, then opening up with his rifle when they gathered in a "mutinous assembly."

Who knows? That doesn't sound very much like the official account, but then everybody still seems very reluctant to talk about what really happened there. Even the website I quote from above admits that it was fifty years before the Government confirmed that this "incident" had actually taken place. It all sounds a bit too much like General Dyer's 1919 Amritsar massacre for comfort, really. And you can still find apologists for that - especially among the new breed of "pro-Empire" British historians. ... 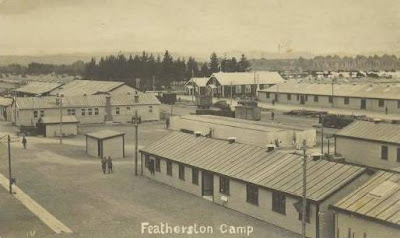 I was deeply interested to read your article. My Mother and Father were brought up in Featherstone. As a result I was told about the reading of the riot act, I knew shots were fired but not that anyone had been killed. Then when as you say you compare it to the New Zealand "incident" it beggars belief I had no knowledge of this appalling "massacre".